The Black Widow is one of the most iconic characters of the marvel universe. Especially when she is well known in the MCU, you can’t walk into a comic store or talk to a true comic fan without immediately hearing her name.

Unlike most other superheroines, Black Widow is a deadly super spy. She’s not a damsel in distress, but she is a strong and independent woman. She’s also a former Russian spy who went rogue.

When Marvel unveiled the new action figure line for Black Widow, they also revealed an exclusive variant of the figure, the first time such a collectible had been made available. This Black Widow action figure features Black Widow, Natasha Romanoff, in her classic look reunited with her past group of spies to stop the lethal force.

The Black Widow Marvel Legends Wave 1, a set of 7 figures, was released in 2019. The collection consists of seven 6-inch action figures, which include:

And it comes with Crimson Dynamo BAF.

Although this set was already on the market, the movie was not released together at that time.

The Wave 1 set is still available at Amazon.

The Marvel Legends Black Widow figure collectible is a 6-inch-scale (15.24 centimeters) that surely kids, fans, and collectors will enjoy. The figure is made from the scene in the film in which the character is in a white costume. It captures the accurate appearance of Ms. Scarlett Johansson as the Black Widow making it more realistic, which relatively the best idea.

From a sculpting perspective, Hasbro has managed to capture the best of Scarlet Johansson’s likeness into this Marvel Legends Black Widow figure. I think it is the best one to date done by them.

Black Widow (White Suit) is a deluxe figure. It’s the first time we see Natasha Romanoff in a white outfit in the MCU. It’s a nice change from the usual black! I think it’s pretty cool.

This figure has detailed premium design and articulation for a high pose-ability and display as a Marvel collection. Additionally, premium delivery and detailing are provided to this figure. It also gives a feature with multiple points of articulation, making it a great addition to any of your action figure collections.

That’s a considerable number of accessories and a significant number of interchangeable hands. It’s the first time Hasbro has produced one like this. Collectors should be happy about this, and I hope that it will continue this way with future releases.

As mentioned above, a poseable action stand is also included which the figure has a clear, flexible action stand that can hold the figure in its perfect action pose. The stand also has peg holes to which accessories can be attached.

Place the figure and accessories creatively, and you will get an impressive and powerful action with the bright flames/explosion effect. It’s a perfect action stand!

I think Hasbro has just given us the best basic stand with its 6-inch line.

What I Like About This Marvel Legends Black Widow

What Are Others Saying About The Marvel Legends Black Widow Deluxe

Hit the link to the reviews others made on Amazon. Most of them are enjoying the Black Widow. 82% of those who have purchased it gave it a 5-star rating.

Definitely the ultimate black widow legend if you had to pick one from the whole line this should definitely be the one I recommend.

This is an awesome action figure set to have before the epic film is to be released. Great job, Hasbro!

How Much Is The Marvel Legend Black Widow 6-Inch Deluxe Set?

You can purchase this Marvel Legends Hasbro Black Widow at the list price of $29.99. Check Amazon for the latest price. It is usually cheaper. If you are a Black widow fan or an action figure collector, surely you will love it, and it is worth getting.

Part of the fun of collecting toys is that we all have different tastes, and some of us adore superheroes while others prefer cartoon characters. Like moviegoers, kids bring their preferences to the table and may be excited by the likes of Iron Man and the Incredible Hulk. In contrast, others may prefer the characters in the Marvel Legends line, like Black Widow. 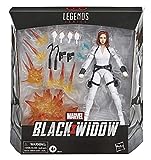 Something About Marvel Legends Action Figure

Marvel is one of the cornerstones for fan collection from its over 80 years in comic book history. The Marvel legend series are being made and designed with premium details and articulation to provide top-of-the-line pose-able figures.

They can be displayable collectible from the fan-favorite marvel comic universe and marvel cinematic universe characters. What’s great about the Marvel legend series is it offers an elite character-inspired product that Marvel fans and collectors would love to have.

Marvel Legends are one of the industry’s most famous lines. They provide an opportunity for everyone to get into the action figure hobby. Each 6-inch figure is based on a Marvel Comics character. The figures are highly detailed and made of durable materials and come with interchangeable parts and accessories. In addition, Marvel Legends come packaged in a collector-friendly window box.

Get one for yourself today!

This website uses cookies to improve your experience. We'll assume you're ok with this, but you can opt-out if you wish. Accept Read More