What Is Marvel Legends BAF?

Marvel Legends is an action figure line based on the characters of Marvel Comics, initially produced by Toy Biz, then by Hasbro (starting 2006).

In 2005, Toy Biz introduced the “Build-A-Figure”. The collector community refer it as a “BAF”.

Each figure in a Marvel Legends series is packaged with a part needed to build another action figure – the BAF figure.

An action figure collector who bought each figure in the series would then have all the complete components to assemble a character unavailable in individual packaging. The BAF figure is not only unavailable individually, but the parts are also not sold separately.

The BAF figure became such a hit with toy collectors that it became a Marvel Legends feature for a long time.

To build the VenomPool action figure, you will need all 5 of these Marvel Legends Action Figure. The head comes together with Carnage. The right arm comes with Morbius while the left arm is from Venomized Miles Morales. The torso comes with Venomized Ghost-Spider and finally both of the legs come together with Phage. 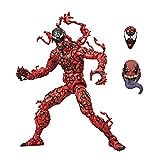 And when you get all 6, this is how the VenomPool action figure would look like.

Out of ideas for a Christmas gift?

Christmas is coming. If you are looking for something to get for your children, don’t simply buy any action figure but get the Marvel Legends BAF series. At least they could build something on their own and appreciate their toys better.

Marvel Legends is suitable for children 4 years and up.

Don’t buy the whole series upfront. The VenomPool BAF requires 5 action figures. Get 3 of them first i.e. the Venomized Ghost-Spider, Phage and Carnage.

Let your child build an incomplete VenomPool without both arms.

Build the anticipation and then go action figure hunting for both arms at your favorite toy store. It will be fun for the both of you.

Spider-Man Superhero Stories for All Ages

This website uses cookies to improve your experience. We'll assume you're ok with this, but you can opt-out if you wish. AcceptRead More