I actually have only one Wolverine Action Figure. That is the stunning black attire Uncanny X-force version.

Wolverine is one of my favorite comic character. He is such a badass. His back story make him one of the unique characters in the X-Men. I currently have Wolverine in my pull list i.e.

I also have the 2020 iWolverine limited series (which I don’t really like), Wolverine: Origin, X-Force: Sex + Violence, Rick Remender’s extraordinary Uncanny X-Force and many more.

When he was first introduced in the final page of Incredible Hulk #180, before he actually got into action in #181, there’s nothing much was said about the character. He just had claws and worked for the Canadian government.

Only after Wolverine: Origin, that we got to know his real name, James Howlett, the tragic events around his first love and how he acquired the name Logan and more.

This package includes 2 figures and 4 accessories and the Hulk is about 2 inches taller. 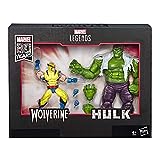 This is the most Amazing Wolverine action figure ever. This Revoltech figure is almost perfect, if it is not. It is super-articulated and has lots of accessories. Yes, it comes with 10 accessories which you can truly personalize it to make it your own and stand out from the other Wolverine in your collection.

It comes with two heads, six pairs of hands (clawed fists, a sword holding hand, a fist, and a pair of holding hands), a sword with its cover, and a fabric costume to truly capture the iconic Wolverine.

Something About Wolverine That You Should Know

He has a very strong healing factor. If you are following the current X-Force series, to be specific in X-Force #5, he has no problem to get back on his feet after being cut into half. With some help from Forge of course.

He is immune to virtually all toxins, slowed aging process. Enhanced sense and physical attributes. He is capable of seeing things at a maximum distance greater than any normal human. His hearing is also enhanced, and he is able to recognize people by scent. It’s not possible to stay hidden from him.

He also has the indestructible adamantium bonded to his skeleton, thanks to the Weapon X program. And of course, the Wolverine retractable claws.

The claws are housed in his forearms and are part of his skeleton system. The claws are naturally sharp. Since he has adamantium, his claws were able to cut through almost any material. Cutting steel like butter without any fear of damaging the claws.

Wolverine is a master of multiple forms of martial arts, including samurai, and weapons. He is also a trained expert in explosives, assassination techniques, and computers.

In short – a badass killing machine.

However, when it comes to action figures, they are a little fragile. Even though Wolverine has a healing factor, be gentle.

So, tell me, if you can get only 1 Wolverine action figure, which one would it be?

Should You Have A Comic Pull List? 6 Reasons You Should

This website uses cookies to improve your experience. We'll assume you're ok with this, but you can opt-out if you wish. Accept Read More